So we have been working on our coop every spare second that we get and here is where we are right now. 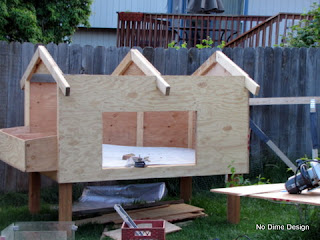 It will get there in time but until then I am keeping and eye out for signs of who might be male/ female. We live in a city and that mean there are NO ROOSTERS ALLOWED!

At first I assumed that all the chickens that grew a comb would be a rooster and that would be the end of it but in looking at different pictures of different breeds that isn't always the case.

Also, we got them as a mixed batch and had no idea what breed they were either. I THINK I have it narrowed down to Rhode Island Reds, Golden Comets, and, as suggested by a reader earlier, one Copper Maran.

Soooo.... any one want to play the guessing game?  Male? Female? Breed?


As eggs there were 2 yellow/white ones (the first two pics), 2 brown ones (third and fourth pics), and 1 black one (last photo).  To me that should mean that color should equal breed or at least sex, but it's looking like 3 roosters to me!

Now, I have NO experience in these things but it's fun learning new things about all the different kinds of chickens in the mean time!

I would LOVE to hear your opinions, guesses, experiences, and expertise!